Whew!  I've done latch hook in the past but I'll admit, I've never finished one before!

This is going to be one of my DH's Christmas presents.  I'm glad I got it completely done with time to spare.  Too many times, I've been up well past midnight on Christmas Eve trying to get a gift done.

I found a couple of finishing tutorials online that did help but I thought I'd share how I made my latch hook project into a wall-hanging to hopefully help someone else.  Hopefully, my directions are clear enough that even someone who wouldn't normally even sew on a button can do this.

Here's the completed project from the back. 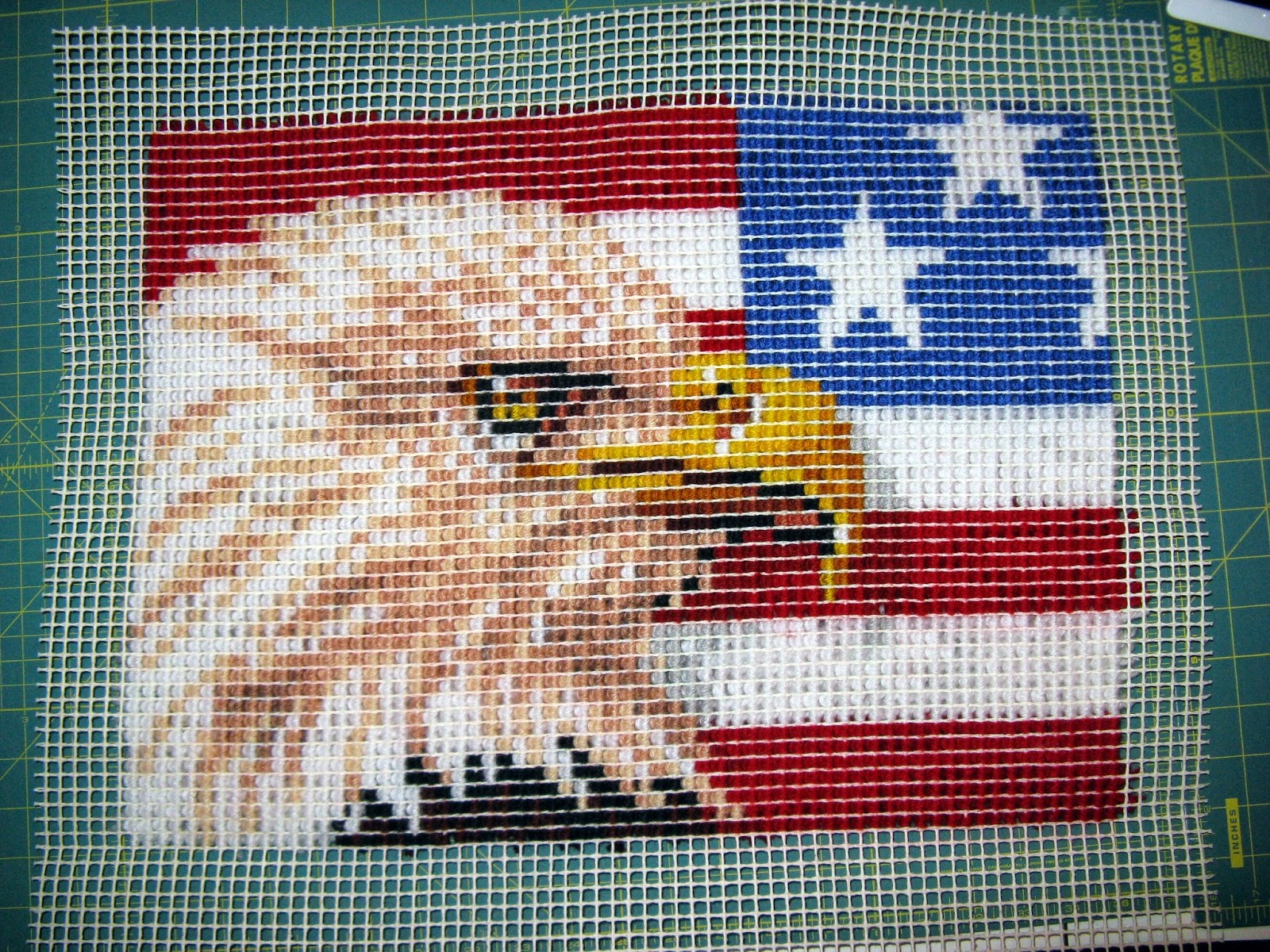 First, I trimmed the edges.  I chose to have two full rows of canvas around every side. 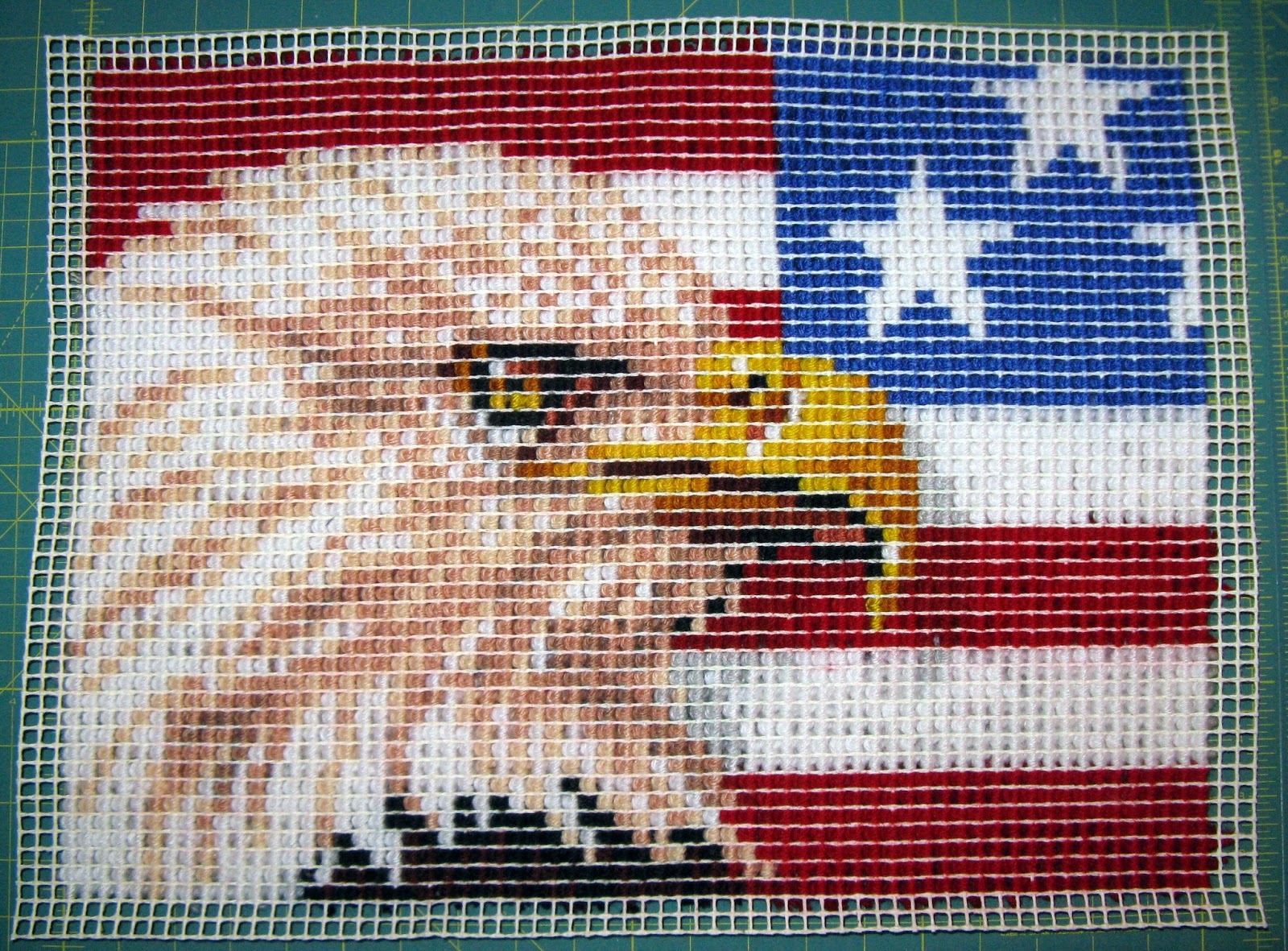 Then I notched the corners to reduce the bulk and make it easier to fold the edges over.  I actually had to trim one more horizontal canvas from the top edge of this notch in order to fold it over properly. 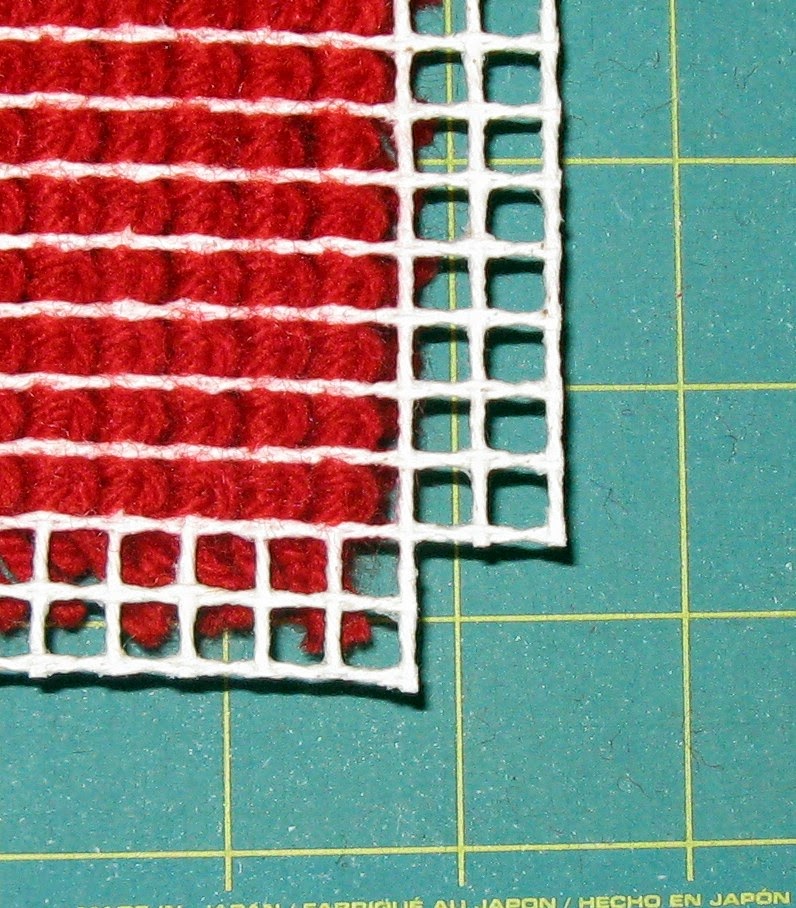 I forgot to take a photo at the corner where I started.  I was using a 4-ply yarn to stitch the edges down.  When I knotted it to start, I separated the end into two 2-ply sections.  I passed one 2-ply bit through the canvas and then knotted the two sections together.  You can kind of see that in this photo where I was adding another length of yarn. 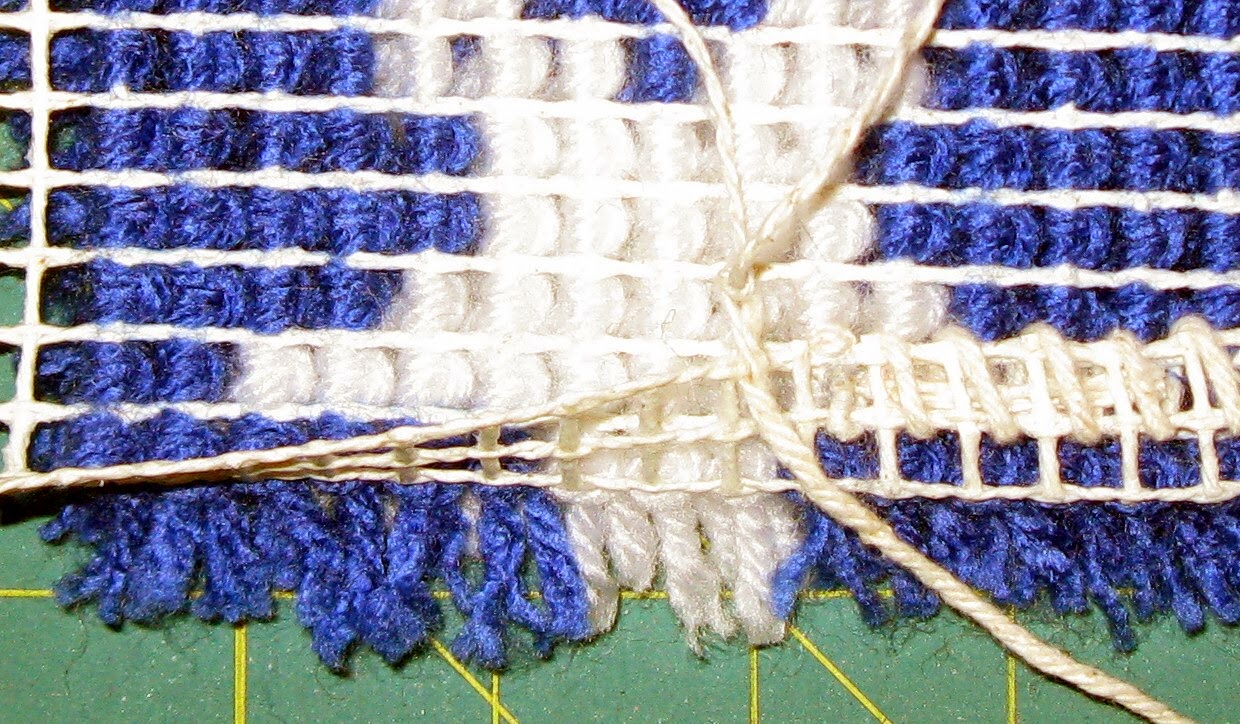 I lined up my horizontal canvas edge with the second row up and stitched the canvas down.

When I added a new length of yarn, I tucked the ends of the new piece into the canvas fold so they wouldn't show and would be more secure. 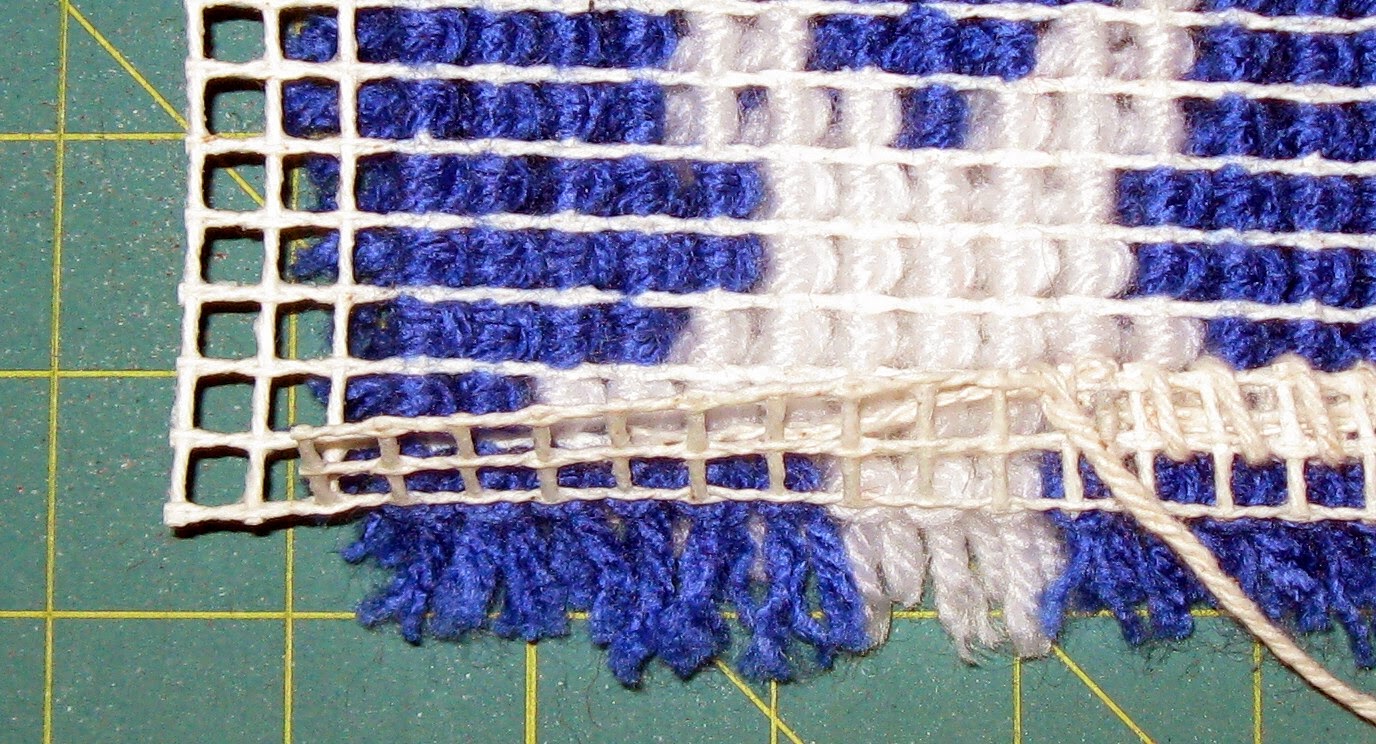 Here's the back once all four edges were folded over and sewn down: 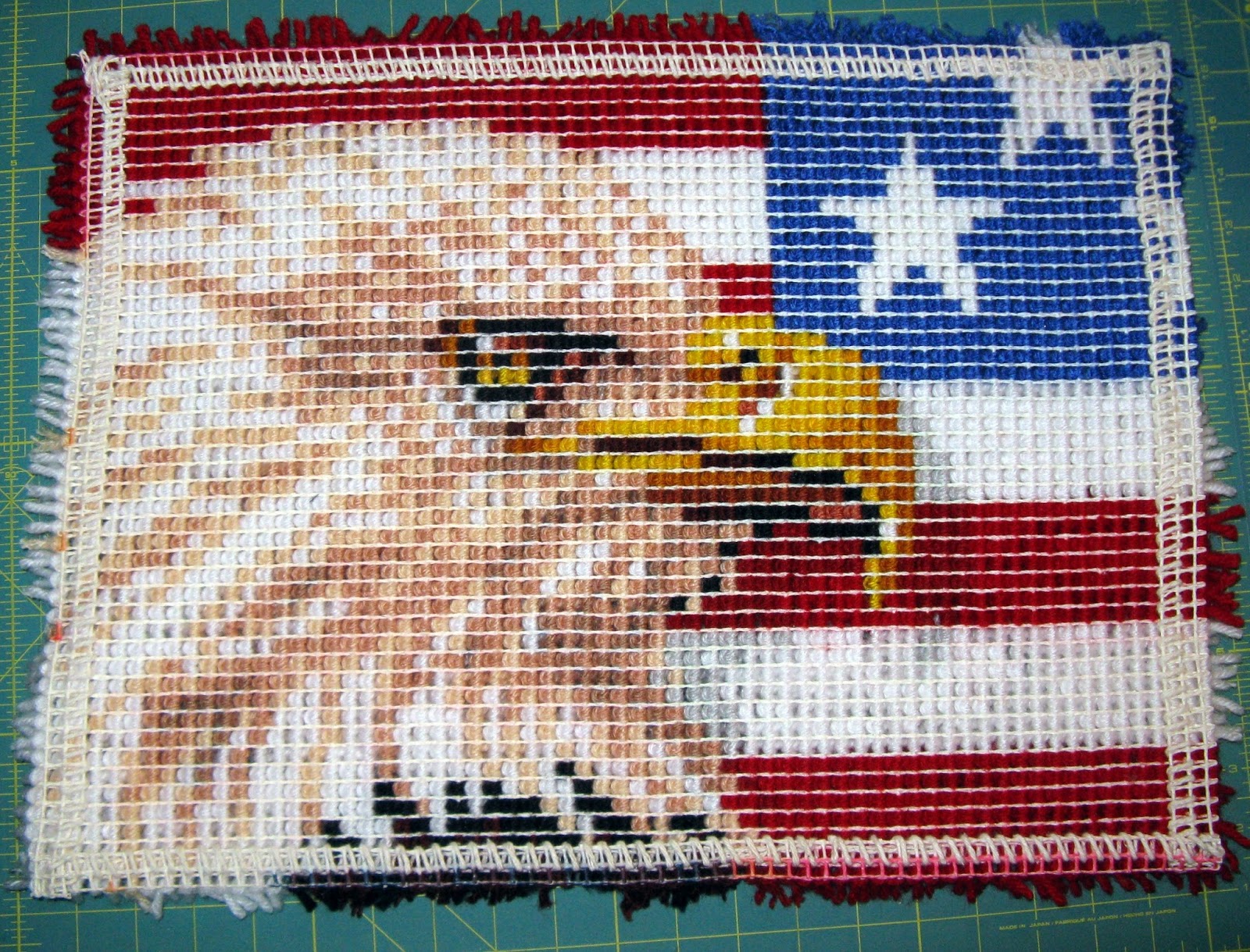 Since I wanted this to be a wall-hanging, I had to have something to hang it from.  Here's where the quilter in me came out.  I measured the canvas from edge to edge.  It was about 19" wide. I took a piece of fairly heavy cotton fabric and cut a piece 20" x 5½".  With it right side down, I folded each short end over 1" and ironed them flat.  This gave me a width of 18" for the sleeve.

I took the material to my sewing machine and did a plain straight stitch near the raw edge of each end.

Back to the ironing board, literally.  I folded the fabric in half, right sides together and ironed it flat.  I went back to the sewing machine and ran another straight stitch down the long side near the raw edge.  This seam is ¼" or a bit less.

Back to the ironing board.  I shifted my "tube" of material so that the seam is in the middle and ironed the seam open.  I also made a point of ironing the top and bottom edges flat.

Next, I turned my tube right side out.  The seam is on the back side.

Using black hand-quilting thread, I started attaching the hanging sleeve to the canvas.  This is one long strand of thread.  One end is put through the eye, then both ends brought together and knotted.  The knot is then held as far away from the needle as possible which puts the middle of your thread at the eye of the needle.   I put my needle into the tube about ¼" and came out through the top edge.  This hides your knot inside the sleeve.  I then took my needle behind the first horizontal canvas thread below the folded edge. 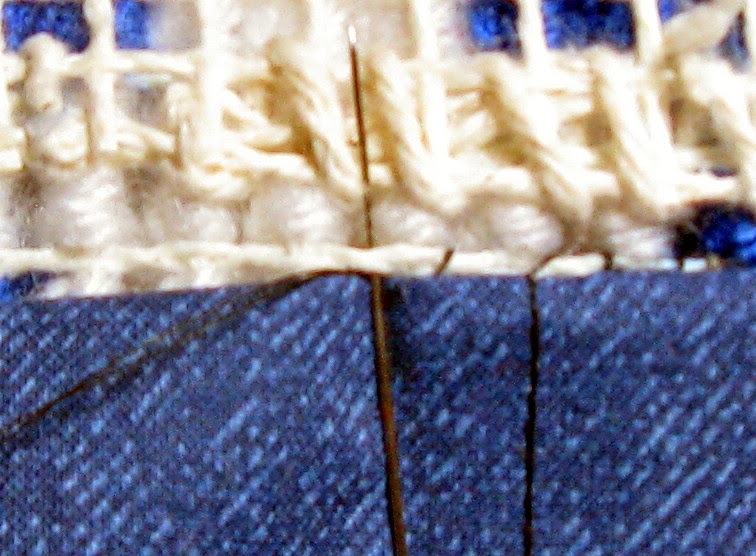 Then the needle goes back into the folded edge of the sleeve and then to the left just far enough to come out again to the left of the next vertical canvas thread (one canvas hole).  Basically, you are doing horizontal stitches that are hidden inside the hanging sleeve.  If you are left-handed, you are probably going to want to start at the left end of your sleeve and sew to the right. 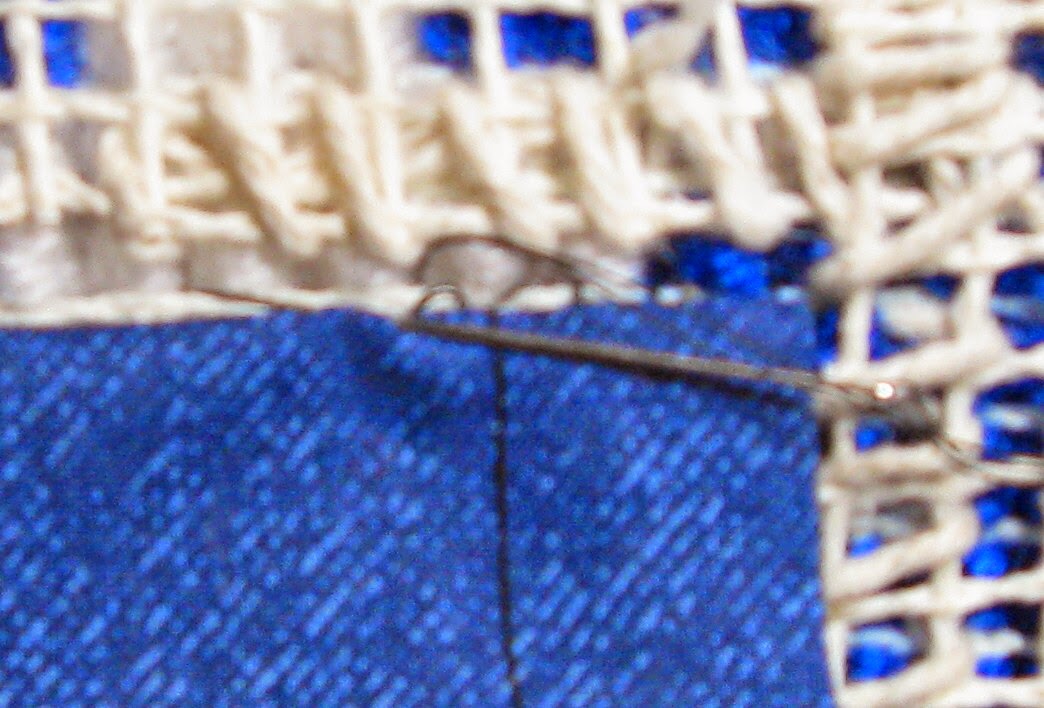 Continue stitching around the horizontal canvas threads and through the hanging sleeve until you get to the other end.  Knot your thread off.  I knotted mine around one of the canvas threads.

Rotate the canvas 180° and sew the bottom edge of the hanging sleeve the same way you did the top.  Here's the sleeve completely attached.  You can see that it is just inside the folded over canvas at the top and at the sides.  This gives it enough room to be stable yet it's far enough away from the edges that it won't be seen. 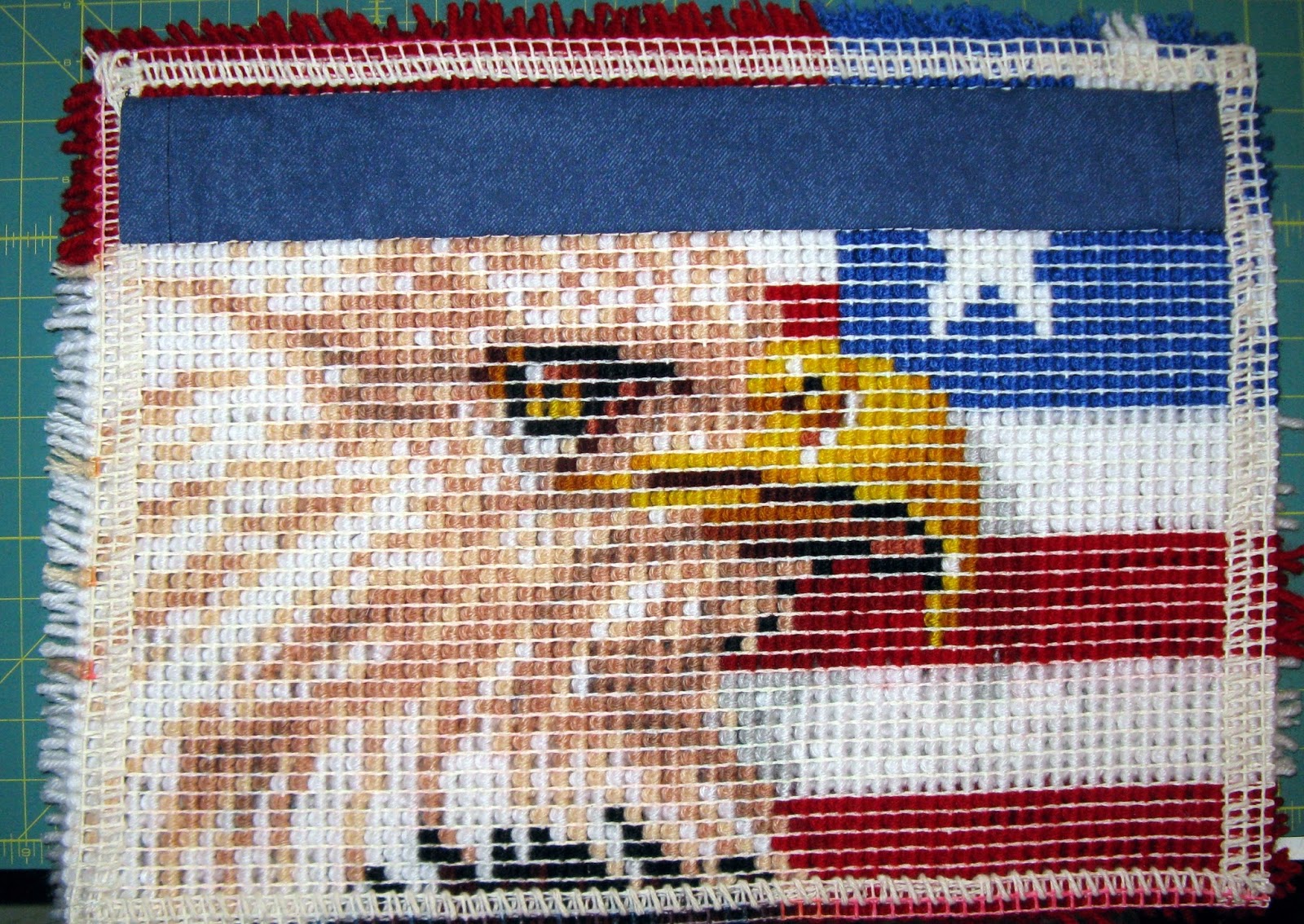 Here's the finished latch hook hanging from a cafe curtain rod.  Normally, I have a quilt hanging there but I took it down temporarily for the "photo shoot". 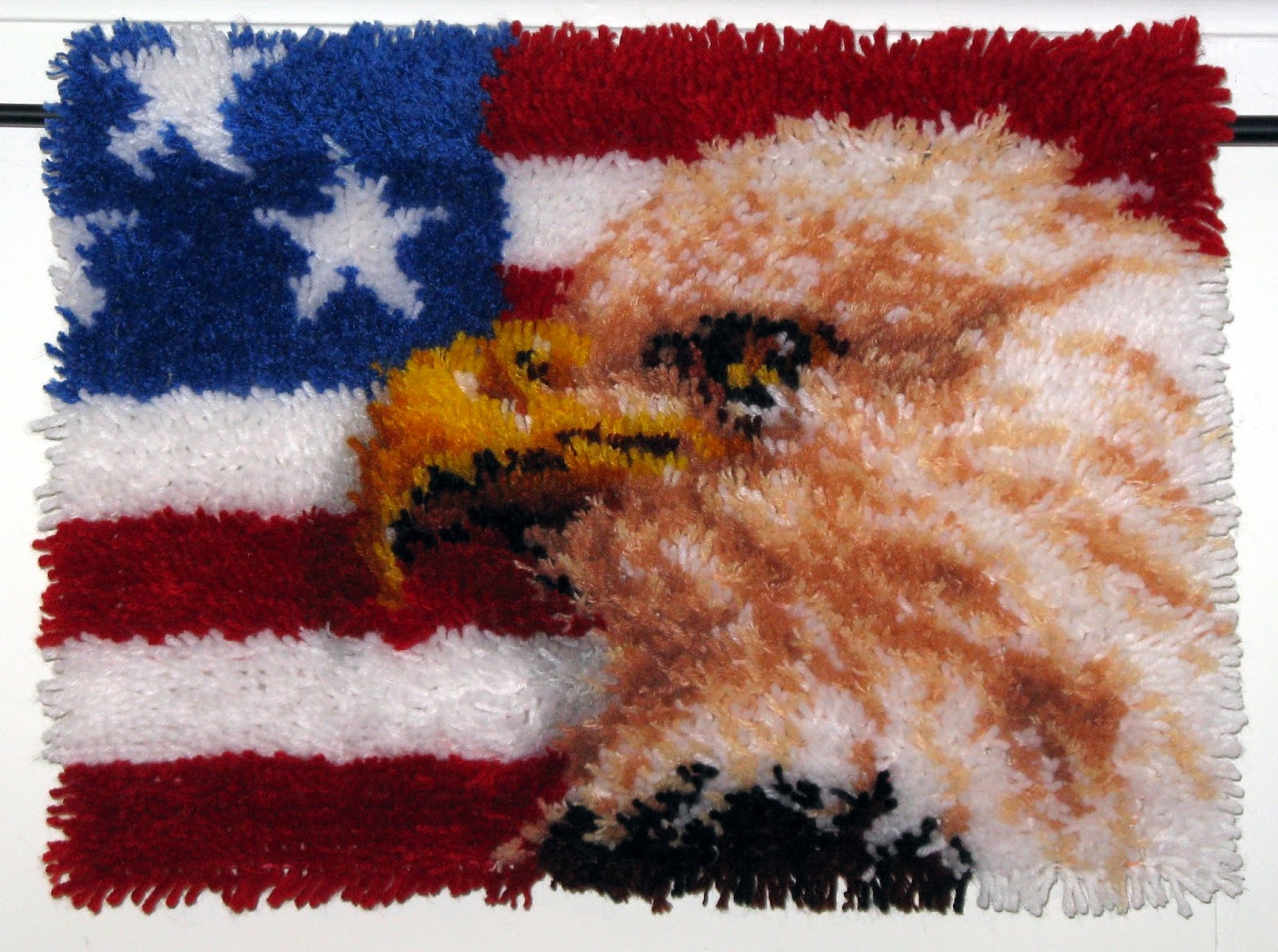 The curtain rod is about 1½" away from the wall which doesn't work too well for latch hook.  I purchased a 7/8" dowel for my husband to use.  He doesn't like me using his tools, so he'll have to cut it down.  I didn't know what kind of hardware to get to attach the dowel flush or almost flush to the wall, so DH is on his own there.  ;-)

Will I ever do another latch hook?  Probably not.  I'd been considering doing one as a rug for my office but the design would have to be something I couldn't live without before I'd do one again.  I will say that this one was better than any of the ones I'd attempted in the past.  Not only was the design printed on the canvas, it came with a chart, like you see in cross stitch.  I didn't even pay attention to the canvas, I went strictly by the chart.  Oh, I also got this on sale for $3.99US so with the sleeve and the dowel, I spent about $7 total.  That's not bad!

Pull the other thread said...

Fantastic finish. Thanks for the instructions.

Wow, looks great! I always wanted to try latch hook, just never got around to do it...great idea of finishing as well!

I've done a few latch hooks but I never finished them either haha. It's a break from cross stitching but not something that holds my attention. I have a family member that has finished HUGE wall hangings. They are beautiful finished. Congrats on your finish and fantastic finish into a wall hanging.