A Couple of Quilts

These aren't recent finishes but ones I realized that I'd never photographed.

First up, we have a scrappy Log Cabin quilt.  The measurements are all approximate because it's been washed quite a few times. :-) 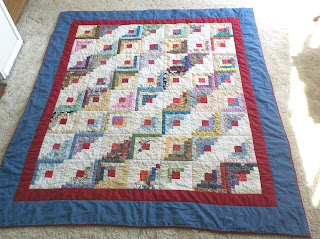 The hand-quilting was done in vertical rows using a stencil.  I don't know what the name of the stencil is as I lent it to my sister and she still has it.  It's a floral-vine type design. 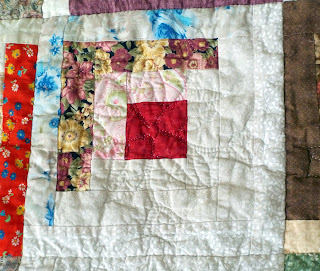 The second quilt is a happy block.  That's not an official name, it's just what the group I was in called it.  I did this one as an exchange* with an online group I used to belong to.  My theme was blue & white, so the centers are all blue fabrics and the borders are all white fabrics.  Looking at the quilt that might not seem to hold true - when I washed it, one of the blues bled and some of the whites soaked it up.  :-) 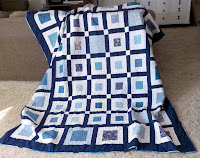 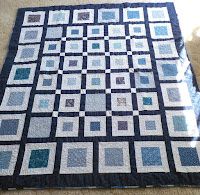 There are 2 different sized blocks in this quilt.  It is laid out with a 5 block x 6 block center then bordered with the larger blocks.  I used sashing and cornerstones to make the overall dimensions of the smaller blocks fit inside the larger border blocks.

My sister and I both quilted this on a Handi-quilter longarm that I had rented time on at a now-closed shop in Olympia, WA.  I'd do one block, then she'd do one, and so on.  It was great because it meant neither one of us was standing for too long and we finished this top and another within 6 hours.  It was the first quilt either of us longarmed, so I didn't care what it looked like, I just wanted us to get comfortable with the machine.  We went old-school on it - as in grade school.  Like those random drawings we used to do and then fill in the spaces with different colors. 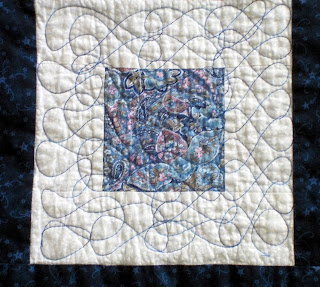 I decided to keep the binding scrappy as well.

* Here's how the exchange worked:

For the quilt's center blocks, I sent (6) 3½" squares (blue) to the people in my group.  Usually 5 other people.  They kept one of the squares for themselves.  They put 2½" borders (white) on my squares and mailed them back to me.  The color choices were only for my quilt.  The other members sent random colored squares to me that I put borders on and mailed them back.

For the bigger, border blocks, the centers (blue) were 6" and also got 2½" borders added.

If the title of this confused you, don't worry, I'm confused too!

Last weekend, hubby helped me paint the ceiling in my eventual quilt studio.  He even bought the Kilz primer/sealer for me!  Gotta love that man!  He had suggested the Kilz because the previous owners were smokers (ugh!).

We borrowed the neighbor's paint sprayer.  We don't know, but there's a chance, that the popcorn ceiling might be asbestos.  We can't afford to have it remediated, so we're doing everything we can to not disturb it.  Painting is okay - especially with a sprayer.

Here's a before photo: 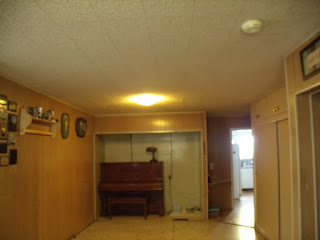 It doesn't look too bad, in the full shot, but take a look at this one: 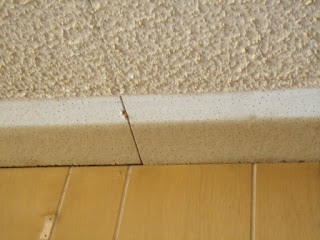 The popcorn is medium brown, the white stripe is where a board was holding up a valance, the dark along the wall is how dirty the ceiling tiles would be if the popcorn hadn't been added later.  You can also get a glimpse of how stained the paneling is from that light spot in the lower left corner.  That's where I removed a curtain bracket.

Here's an after photo: 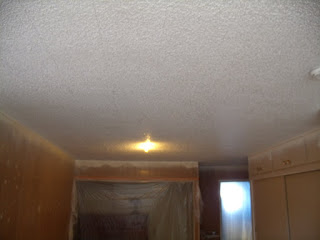 Isn't that much brighter and cleaner?  Yes, we got some on the walls...intentionally.  We don't want to remove the trim along the ceiling because that would disturb the iffy popcorn, so we hit it with the Kilz and the white ceiling paint.

Now, you're probably wondering where the "...not" comes in in my post title.  This photo might clear that up: 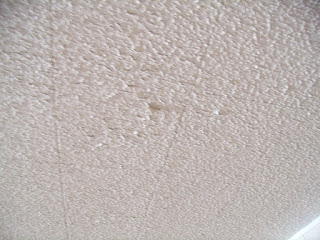 Yep, that's the paint and primer peeling off the ceiling tiles!  Thankfully, none of it is actually falling down and the popcorn seems to be contained in the paint/primer.  So the ceiling is painted, but it's not.

Hubby came up with a brilliant solution.  You can safely cover up chancy popcorn by putting boards over it, like ¼" plywood, MDF, etc.  We're going to use beadboard and 1x6's and create a coffered ceiling!  It will extend into the hallway as well, since we painted that and it's also peeling.