It's a mystery no more! 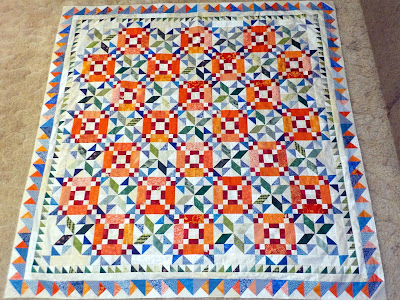 In the directions, Bonnie gave the option of doing the oranges as string-pieced or solid pieces.  I chose to do the solids and I'm very happy with my choice!  That choice also made a difference in the way my borders were pieced.  The neutrals in my borders ended up being long rectangles rather than extremely scrappy.  Here's a close up of my non-pieced oranges and border neutrals: 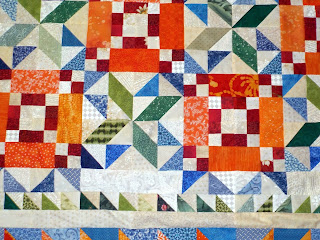 I would never have thought to use these colors together on my own!  I'm thrilled with the result, though!

Now I get to cross this off my 2019 Finish It Up Challenge list!

Disclosure:  Some of the links below are affiliate links, meaning, that at no additional cost to you, I will earn a commission if you click through and make a purchase.

I was having issues storing my quilting stencils.  I had them on two nails in the wall of my sewing room.  This really didn't work well.  It seemed every time I wanted a specific stencil, it was at the back!

After searching the internet and Pinterest (love me some Pins!), I saw where someone had used a lamp shade to hang their scrapbook embellishments.  They had basically made a stand with a lamp shade at the top so the whole thing looked like a floor lamp.  I don't have that much floor space but was still intrigued by the lamp shade part.

Thanks to hubby's brain and other help, I was able to achieve what I wanted.  Really, love my hubby!  He acquired the shade for me from a local junk shoppe - no charge (the owner's a friend).  I had given him the minimum dimensions that I needed:  6" (15.24cm) diameter at the top, at least 6" from the top ring to the bottom ring, at least 13" (33.02cm) diameter for the bottom ring.  These dimensions allowed enough room for the stencils to be hanging opposite each other on the shade without overlapping across the diameter.

I didn't take photos of the process, but I'll tell you what I did.

That's all it took to prep the shade!

Since I didn't want it to be a floor stand, I decided I wanted to hang it from the ceiling (I have a low 7' ceiling).  I didn't know how to achieve this, so hubby's brain helped.  We went to Home Depot and got a hanging bolt (about 4" long overall).  I knew what I had in mind, but would never have been able to explain it to anyone else.  For those, like me, who don't know what a hanging bolt is, it's a combination of a bolt and a screw.  One end is pointed like a screw and the other is threaded to take nuts.  It doesn't have a head on either end so it's perfect!

I'd never used one before, so hubby showed me what to do.  He took a nut and put it on the bolt end, high enough to get a second nut on it.  He then put the 2nd nut on until it made contact with the 1st one.  Basically, this "locks" the 2nd nut in place so that you can use it as a handle.  After that, I was on my own for installation.  This is fine because I do know my way around tools...just not hanging bolts.  :-)

For installation, I held the lamp shade frame where I wanted it, making sure to allow enough room all around for the stencils.  I used a pencil to mark the center of the frame on the ceiling.  Next, I took a drill fitted with a bit just a hair smaller than my hanging bolt and pre-drilled a hole for the bolt.  Using a ratcheting socket wrench, I fit the socket over the lower nut on the hanging bolt and screwed the bolt into the ceiling.  I did have to move both nuts a little further up the bolt so that only the lower nut (the "handle") was in the socket.

My new contraption doesn't weigh much but I did make sure that I was screwing it into a stud, just to be safe.

I then removed the lower nut but left the upper one on.  I don't want my shade to rock back and forth so the upper one acts as a stop.  I then fit the shade onto the bolt and replaced the bottom nut.  There is a tiny bit of room between the nut/shade/nut so that the shade can spin but it doesn't rock.

I then hung the stencils from the shade using S hooks with clamps. * (see below)  Here's my completed stencil storage: 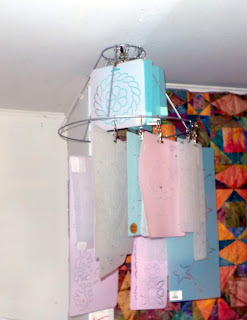 ..and here's a close-up.  You can see the hanging bolt and nuts plus the hooks I used. 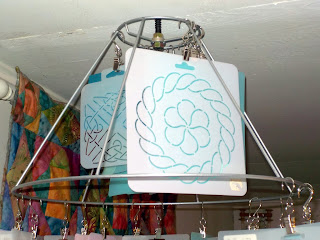 ...and here are the affiliate links that I mentioned at the start:

Finish It Up Challenge 2019 edition 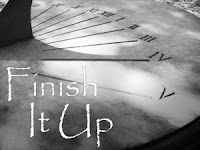 I've done this Finish It Up Challenge the last couple of years and thought I'd do it again.  2018 wasn't my best effort, but I still got some of those done so I'm hopeful.

Since I'm going to be working on converting a large spare bedroom into my quilting studio, there are going to be a lot of steps toward that listed!


There will probably be more added to this list as I finish items up.  I'm really keen on getting the quilting studio items done but some of those will depend on finances.  I'm not going to do any step without being able to pay cash for it.  The painting shouldn't be a problem but I'm definitely going to have to save up for new flooring.