Birds on a Wire update

Here is yet another of my Heaven and Earth Designs projects, Birds on a Wire.  Unfortunately, for anyone interested in it, it's retired.  While I haven't gotten to them yet, the "birds" are goldfinches which are the state bird of Washington where I live.

I finished the first page a few weeks ago and forgot to post about it. 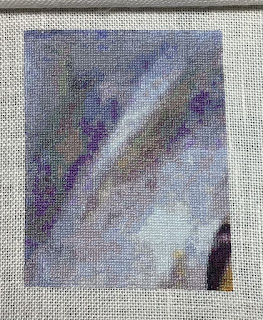 I finished the 2nd page on SSMC Farewell to Anger just a few minutes ago.  I’m stitching it 1x1, half stitches on 40ct. fabric.  The chart has 99 pages, so I’ve barely made a dent.

Since this is the largest project I have, I’ve decided to make this my focus piece rather than God Speed.  I’ll still work on that one but randomly. 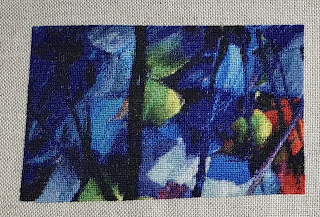 I used a randomizer app to choose my next project: The Sistine Chapel.

It's been a while since I last posted.  Life has a habit of getting in the way.

This finish is from a few months ago but I never posted about it.  It's my version of a disappearing nine-patch.  Mine's a bit more involved than most.  I made it "disappear" 3x!

Here are my initial 9-patches.  These were part of an online exchange.  Not all of them were the correct size of 9½", so I found the smallest one and trimmed all the rest to match. 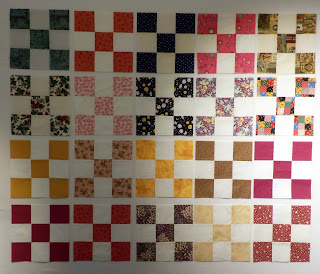 I needed more for a decent-sized lap quilt so I made 16 more for a total of 36.  I then sliced them 1¾" from the edge on both sides, then across the top.  This is the method Teresa DownUnder uses for her double-disappearing nine-patch (cutting width=half of the original individual squares).  My initial squares were only 3½" inches, hers are 5".  This is all of them after the cuts: 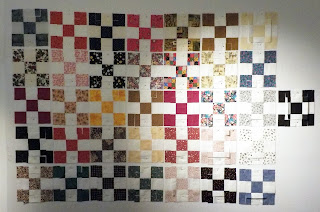 I then swapped between two blocks.  Block "A" and Block "B" received each other's cut-off edges, Block "C" and Block "D" the same, and so on (not necessarily in the order pictured). Following Teresa's method, I sewed the pieces back together then whacked the new blocks down the middle both ways.  After spinning 2 of the sections (see the video link above), I didn't sew them together. 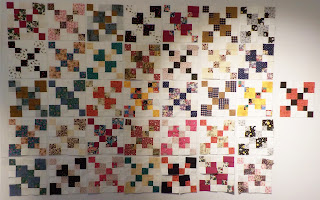 I chose to swap the upper right and lower left corners from my new Block "A" and Block "B" then sew them together.  This is the triple part of my triple disappearing nine-patch.  You can see in the 2nd row down, 3rd & 4th blocks from the right were one of my new pairs: 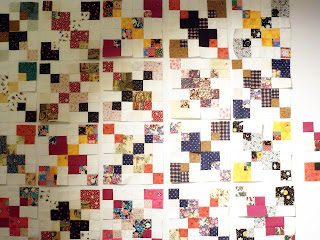 Once I sewed these blocks back together all that was left was the final assembly.  I laid them out in a 6x6 grid and added a border: 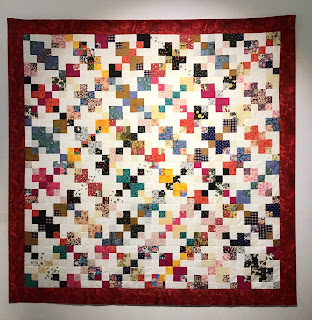 I machine-quilted it on my regular sewing machine.  It's the perfect size for in the car.  Hubby's usually too warm and I'm cold so I have always kept some sort of blanket in our vehicle.  This now resides in our Toyota Tundra.

I had a fairly quick finish recently:  a fleece poncho!  The left photo shows it from the back and you can sort of make out there's a hood. 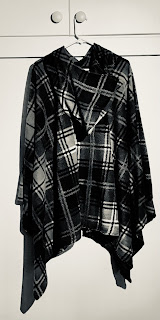 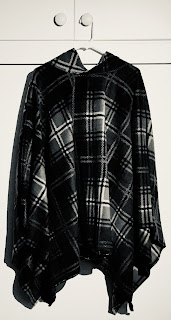 It was quite simple to make.  I used the directions from Life Sew Savory.  She used wool to make hers and I chose to use fleece instead.  I haven't worn it out and about yet, but the weather is now rainy and cooler so it's probably going to get worn soon.

I'm Back. Lots of Finishes!

I'm back, finally.  It's been a rough Summer.  I lost my Mom in June and have been dealing with that emotionally and physically (cleaning out her house for sale).

In spite of the grief, I have been able to finish some things.  I got 2 of my finished cross stitch pieces framed.  First is Heirloom Nativity Sampler from the Victoria Sampler.

The other one that got framed was my Sweet Peas from Cindy Rice. 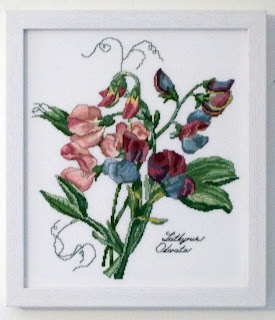 I had had a shoulder injury that took a little chiropractic work and some physical therapy to fix, but no pain now!  Because of the injury, I hadn't been able to work on my mystery quilt.  Now that I'm healed, I was able to finish the Grassy Creek Mystery by Bonnie Hunter.  Here's my finished top: 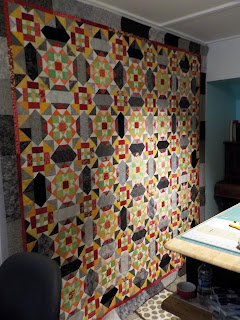 Just a couple of days ago, I had my most recent finish:  another fabric wreath!  I did an Autumn one this time: 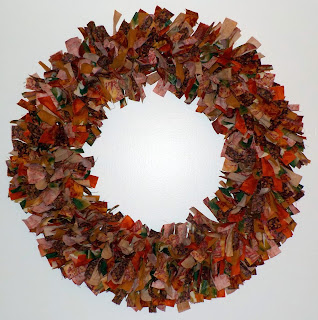 This wreath has 5 different Autumn fabrics.  I still have one more wreath form but haven't decided what fabrics to use on it...we'll see.
Happy Stitching!
Stacy

Andrea asked:  "Are you on the bottom row of pages?"

I'm not.  The bottom row is partial pages, about 30 stitches high.  I'm on the row above that.

I finished another page on Mini Wings in Repose [retired] from HAED a few days ago.  I just forgot to post an update.  Here it is: 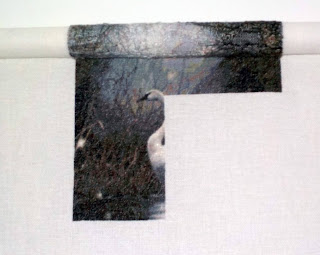 You can now definitely see that there's a swan involved!
I'm stitching this 1x1, half crosses on 32ct. evenweave.
Happy Stitching!
Stacy

I finished my diamond painting last night!  Here it is: 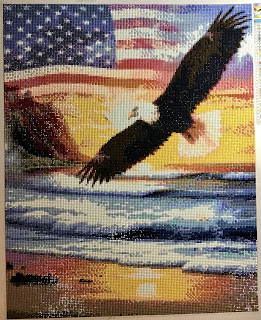 .
I ran a rolling pin over it to make sure all the diamonds were laying flat.  I plan to seal it sometime today.  I will eventually frame it, just not sure when.
Happy Stitching!
Stacy

Birds on a Wire